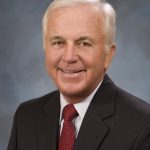 Born and raised in Buffalo, New York, Carl J. Montante’s accomplishments in business and philanthropy have earned him a reputation as one of Buffalo’s most notable citizens. A passionate community leader, Mr. Montante is active in countless organizations and manages the majority of his and his family’s philanthropic contributions with little fanfare. Although the recipient of many noteworthy achievements, one of his proudest professional accomplishments has been completion of Avant, a sixteen-level, mixed-use hotel, office and condominium building which has quickly become one of the City of Buffalo’s crown jewels.

After earning a law degree and practicing as a member of the New York State Bar, he joined his family’s business and led its growth into automotive aftermarket distribution. As the business grew, a need for a larger warehouse arose and it was then that Mr. Montante discovered a passion for real estate development. After managing the design and construction of several commercial buildings, he decided to pursue it full-time and founded Uniland Development Company in 1974. Since that time, Mr. Montante has managed the development of over 15 million square feet of commercial, institutional and residential properties, making Uniland one of the largest developers and property owners in Western New York. As Executive Chairman of Uniland, he is responsible for overall commercial development and portfolio operations in Uniland’s Buffalo and Rochester offices.

As strong as Mr. Montante’s belief in the pursuit of excellence is his steadfast responsibility for strengthening community. He dedicates much of his time and energy to nonprofit organizations in the Buffalo Niagara region including D’Youville College, The Bishops Council of the Laity, Invest Buffalo Niagara and the Buffalo Niagara Partnership. He has served on the board of more than two-dozen organizations including KeyBank, the Buffalo Club, the Kissing Bridge Corporation and Western New York Graduate Medical Education. He has served as chairman for the Catholic Health System, Canisius College, Canisius High School, and the Buffalo Philharmonic Orchestra.

For his efforts Mr. Montante has received recognition from a variety of community organizations including the Seymour H. Knox Humanitarian of the Year Award, Buffalo Business First’s Brick By Brick Lifetime Achievement Award, Canisius High School’s Distinguished Service Award, and the President’s Award from the National Association of Industrial and Office Parks. He has also received the Bishop’s Medal from the Catholic Diocese of Buffalo, WNY Philanthropist of the Year award from the Association of Fundraising Professionals, an honorary degree and Distinguished Alumni award from Canisius College and the City of Buffalo’s Buffalonian of the Year citation.

Mr. Montante is a graduate of Canisius High School and received a Bachelor of Arts Degree from Canisius College, and LLB and JD Degrees from the University at Buffalo School of Law.