Businesses around the country are buzzing about the new Opportunity Zones introduced by the Internal Revenue Service. These unprecedented federal tax incentives are designed to connect private investors to economically challenged communities by encouraging the long-term reinvestment of capital gains into struggling census tracks in need of an economic boost.

Recent IRS clarifications have turned what was once thought to be mainly a real estate incentive into a much broader set of prospects for investors of all types. This is because the investments in Opportunity Zone funds can be derived from any capital gains vehicle: stocks, bonds, real estate, equity positions or any other kind of appreciable assets. 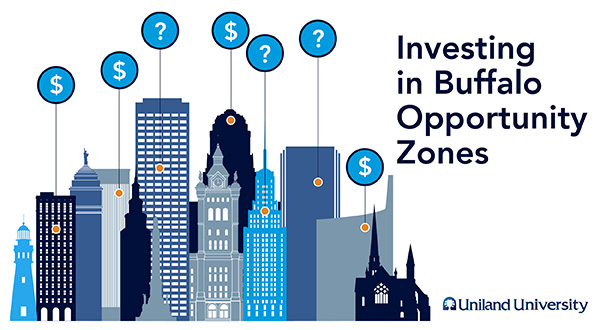 Initially, the businesses believed to benefit most from federal opportunity zones were retailers and realtors, because they could easily satisfy the program’s “50% Test” which requires that half of a company’s income be generated in the zone. However, the IRS recently expanded that view, enabling manufacturers, online retailers and others to generate income from elsewhere, allowing the test to be satisfied by any of the following:

This is being seen as a potential game changer for many cities, whose high-net-worth individuals now have an abundance of investment options in their hometown economic opportunity zones. In fact, according to the Economic Innovation Group, U.S. investors have more than $6 trillion in eligible unrealized capital gains. 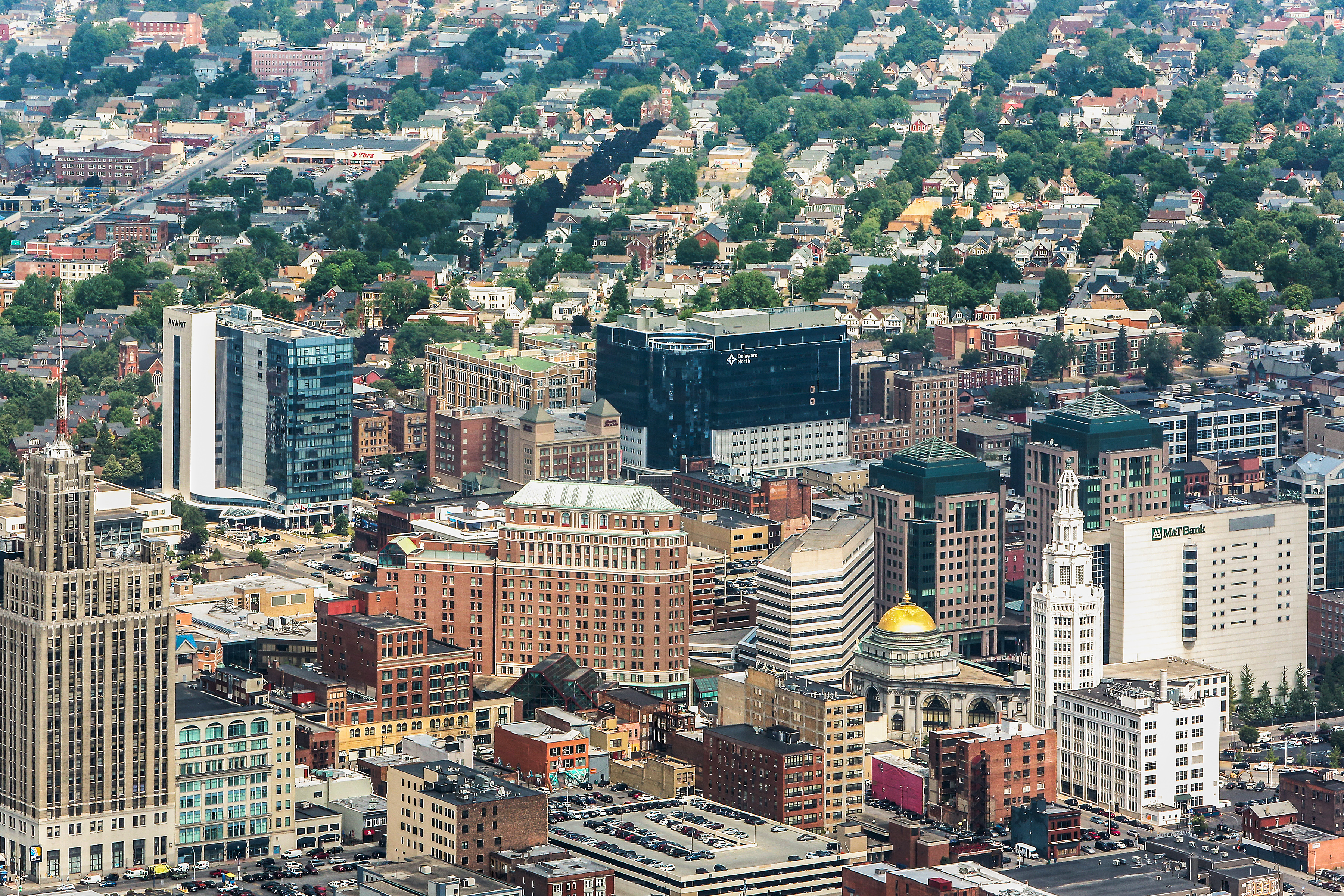 “(The federal government is) attempting to open up the hyper-concentration of venture capital in Boston, New York City and Silicon Valley, and redistribute it to a broader geography,” said Bruce Katz, one of the nation’s foremost authorities on urban redevelopment, and the man who helped create the economic development plan that sparked Buffalo’s recent resurgence.

Katz, the co-founder of Drexel University’s Metro Finance Lab, shared his thoughts at a recent conference held in Buffalo — a city which he believes in strongly, thanks to the great infrastructure and data it offers investors and developers.

“There really is not another city in the U.S. that has the data and resources available to help investors identify these opportunities,” he explained, citing the collaborative approach of our region’s economic development, government, corporate and not-for-profit entities to understanding and mobilizing its Opportunity Zone inventory.

Katz also singled out the work performed to date by the University at Buffalo’s School of Architecture and Planning, saying, “What Buffalo has is highly unusual.”

“A company choosing to lease space in a building within an Opportunity Zone is more likely to attract capital from investors who have capital gains issues — whereas before, these investors wouldn’t really be interested,” Sayadoff said. “The risk would have been greater than the return.” 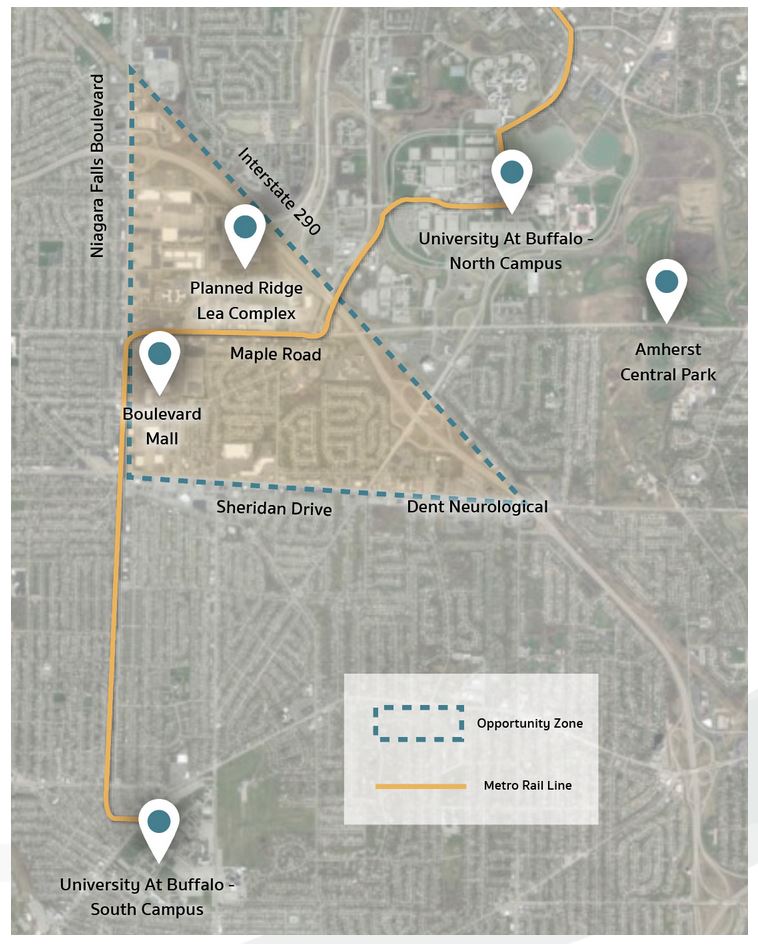 In most cases, the zones are where one would expect; however, some may surprise you. One includes a retail-heavy portion of Amherst, NY, the suburb that is home to the Boulevard Mall, big-box stores and restaurant chains. In fact, that same census track includes the University Corporate Centre (UCC) office park— which houses Uniland’s headquarters, along with dozens of other businesses across five commercial buildings. It includes over 50,000 square feet of Class A office space and amenities.

“This means that, while an existing tenant at UCC wouldn’t qualify for Opportunity Zone incentives, a new tenant looking to invest existing capital gains into a new company or equity project likely would,” explained Paul Evans, Uniland’s Director of Finance & Tax Services.

Sayadoff also points out that these incentives can lower the cost of funds for a company, since equity dollars should become more accessible, in theory.

“The standard loan-to value ratio is 75% to 25% debt-to-equity,” he explains. “For the right transaction, these ratios could be reversed.”

It could also protect start-ups as capital markets tighten. If banks are suddenly less likely to lend money, these equity investors will be an important source of new capital.

“You have to understand that these incentives aren’t fail safe,” Evans cautions. “Tax savings won’t make a bad deal a good one — But, if the deal is solid, it can add significant value to the investment.”

These new credits could impact the debt side too, since lenders might look at an Opportunity Zone business or property more favorably because of its higher resale potential. Even developers and commercial realtors might be willing to offer more flexibility, such as lower rents, since they’re making up that return elsewhere.

Another unique Uniland Opportunity Zone property is HANSA at 505 Ellicott Street in Buffalo, an office and coworking project catering to established and growing businesses. Thus, nearly any company or equity investor entering this new space could potentially qualify for these tax benefits.

In all, Uniland has 40-plus properties in Opportunity Zones, giving lessees and their financiers a host of new options to consider and added incentives to invest in areas in need of a turnaround. These zones have the potential to increase the bottom lines of many businesses and investors — and having the right partner can make all the difference. Our experienced team is uniquely positioned to help you evaluate and take advantage of dozens of Opportunity Zone possibilities through our expertise in navigating Western New York’s physical, regulatory and communal landscape.

Questions About Opportunity Zones? Get In Touch With Our Team